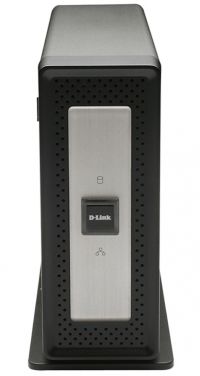 The D-Link DNS-313 is a very vanilla NAS released by D-Link in October 2007 with TV-adverts and everything (see below YouTube video).

It is using the Gemini platform based on ARMv4 Faraday silicon design. New firmware was still being released in 2010. The source files are dated october 2013. It has the following features (see the datasheet for details).

The stock firmware is by now very outdated and dangerous to use on any open network due to the number of accumulated security flaws in the software packages. The OpenWrt images are recommended for use of this device.

It is possible to prepare any SATA hard disk and use that to boot OpenWrt and set the device up as a NAS without any soldering or other trickery. You can just use any 3.5“ SATA harddrive of any size for OpenWrt, keeping the old harddrive around as fallback without any changes. The operating system is completely contained on the harddrive and no changes ever gets written to the flash memory which only store the boot loader and some ethernet MAC etc. All you need to have is:

If your disk is large, there will likely be a lot of unpartitioned space after this procedure, as OpenWrt only installs in the first few hundred megabytes. Partition this free space like this:

With disks larger than 2 TB you will need to created a hybrid MBR/GPT partition table on the disk, lest the NAS will not boot. With this technique it is possible to use e.g. a 10 TB disk in the DNS-313 without any problems. The trick here is to make sure to fill out the MBR compatible table with partitions so that the 4th one is the one that the device will boot from.

To create a hybrid partition table you need to use gdisk (at least that is what I used) while the disk is connected in a USB cradle on a host computer. First you install the OpenWrt image using dd as described above, then I used the following procedure on a 10 TB disk:

OpenWrt assumes by default that everything it boots on is a router and tries to bridge 'lan' and provide IP addresses for that lan and obtain an uplink on the interface 'wan'. This is pretty helpful when first setting up the device: you can just connect it to your computers ethernet socket. Your computer will be assigned an IP number by the DNS313 using DHCP and you can then telnet or SSH into it as it will be host 192.168.1.1.

When using the device on your home network as a NAS this setup is not very helpful since it is not a router.

Instead configure it to obtain an IP number from some other router and then just sit there and be NAS. This is similar to how we configure a dumb AP using managed services

Do the following from the command line as root:

Set Up as NAS

A basic configuration as an OpenWrt NAS is very simple and straight forward, for this memory-constrained device it is recommended to use ksmbd as SMB server if you desire to use the SMB protocol to access your NAS (such as with Windows and many media players). The most common SMB server samba4 is unfortunately too memory hungry and can make the device thrash and hang, and connections and transfers time out as a result.

If you rebuild the firmware image from scratch to get ksmbd you can do like this:

From the top menu, select Network → Filesystem → ksmbd-server, then select as 'y' (star) to get into default install and rebuild OpenWrt. I usually also install the utils. After you put the resulting ext4 filesystem on the drive, rebooted and made basic set-up like above /dev/sda should exist and you can proceed to set up a samba share:

Reboot and you can browse to the IP number (etc) of your NAS, use the dns313 share and upload and download files that will appear in /mnt/sda1, of course you can set up whatever partition etc you like. 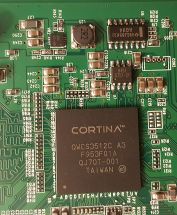 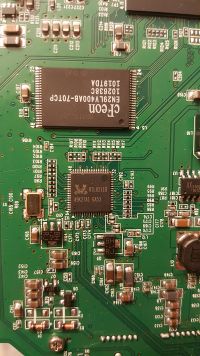 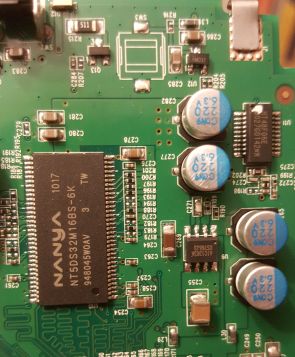 The UART is located above the SoC right of the G751-2f temperature sensor. You need to solder three leads for GND, RX and TX. I don't know if the fourth lead supplies UART power, maybe it does? I just used these three anyways. Once you verified that the UART is working (see below, both RX and TX must work so you get an interactive console) then do not leave it like this! The soldered wires are usually not super-stable there. Instead do what I always do: cover the soldered leads in a blob of epoxy glue. Else they will inevitably come off. Then connect the things to a UART-to-serial adapter/converter such as this SparkFun FTDI adapter like shown in the picture. 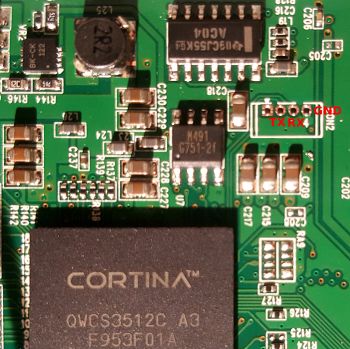 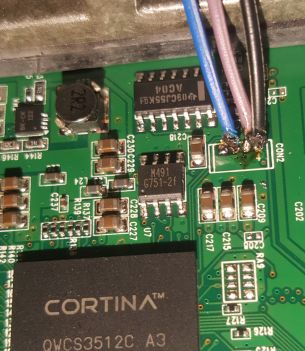 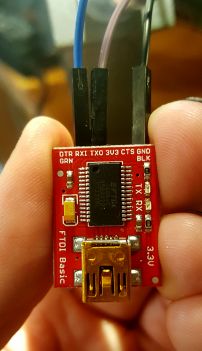 Once the UART is properly connected open (in this case) /dev/ttyUSB0 in your serial console (terminal) program and set it to 19200 baud, no hardware flow control (obviously, do you see any CTS or DTS leads) 8 bits, 1 stop bit.

Then connect the DC connector and power on the device using the pushbutton on the front. The blue (power) LED should blink and then come on permanently and the following should appear in the console if no harddrive is connected:

As you see it fails to find an IDE disk. It's because you haven't connected one. At this point, the console is interactive, so just hit CTRL+C twice and then the green (hard disk) LED comes on, and this happens:

So now you have a ROM/Flash root prompt. This is all the software that the DNS-313 stores in its flash: the rest is loaded from the IDE drive or from the network.

The device is pretty much finished from an OpenWrt perspective, one thing that remains to fix is the USB slave mode: being able to use the USB port to mount the internal drive as USB mass storage from a computer.

For an overview of how the device is structured see the DNS-313 device tree in the Linux kernel.

This is a suggested list of things that “would be nice” to fix on this device:

A mainline Linux kernel works pretty well on the device since we're not using esoteric OpenWrt features such as mtdsplit. You don't even have to use the OpenWrt ARMv4 cross compiler, as the kernel is not using the C library. Just build your gemini kernel with any ARMv4-capable cross compiler something like this:

If you don't have a soldered serial port this is your only option.

It is pretty nice to have a serial console in case your kernel doesn't work properly, else the only symptom will be “NAS don't boot”.

Boot a modified kernel over TFTP

If you have a TFTP server set up, and a serial console, you can use the flash-resident boot loader to boot a new kernel over TFTP without replacing the zImage on the hard drive.

If you copy your zImage to the TFTP root follow this procedure.

Connect a crossed ethernet cable between your statically configured network interface on a host computer and the DNS-313. I just set up the ethernet port on my host computer statically to 169.254.1.1 netmask 255.255.255.0 and go with that subnet (local link).

At boot press CTRL+C twice and you should get dropped to this boot menu:

Typing 5 takes you to a command line interface where it is possible to load a kernel over TFTP.

Your kernel should come up and you can see the boot messages on the console.