The TD-W9980 is a VDSL-capable router launched in 2014. It's identical to the TD-W8980, so check that page out as some information is there and some here. The device works very well with OpenWrt, including the integrated DSL modem. Just the 5 GHz Wifi cannot be used and for VDSL you'll need to use a propriertary binary blob as described in this article.

This page is also for TD-W9980B which is nearly identical, with the exception that you can't flash via the Web UI exploit.

This installation method works for all firmware versions of all devices that are mentioned on this page. However, it is necessary to open the case and to solder a pin header to prepare the installation.

How to open the case

Note: This may void your warranty

This case is pretty easy to open. First remove the four screws, and then pry the case with a small flat screwdriver, starting from the top (as that's the only non-tight place where you can actually put something) till the eight marked points of the case pop out. Then you need to detach the U.FL RF connectors and make sure they're not in the way for pulling the board out. On W9980B one of them is hidden between tho components (one of them is a big red one). Gently push away the red one and pull the cable out.

Because there's copper pads on each side of the board which are glued to the plastic case while also being soldered onto the board, you're going to have to keep them attached for convenience and keep them in mind when manipulating with the board. The UART is not populated, so you're going to have to solder a header on it. Look into the serial console informations at the start of the page for pinout for JTAG.

The pin header for the serial console is not populated. It has to be soldered onto the board. A usual 2.5mm J7 pin header will do the job. 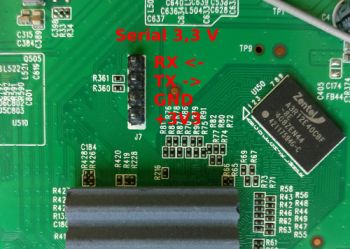 Press t on the console to interrupt U-Boot autobooting.
Logon through serial by pressing Enter and using: admin/1234.

Before starting the process, it is a good ideal to start a TFTP server on your PC listening on its Ethernet interface on IP 192.168.1.2/24. The default TFTP server IP for the u-boot that will be downloaded in the next step.

For ease connect the ethernet cable to the router and PC before starting the boot process.

Connect a computer to the router via the JTAG (be careful not to fry the router with 5 Volts and use a logic converter to drop it down to the router's 3 Volt TX and RX pins). DO NOT CONNECT VCC!

Note: Make sure it accepts user input by interrupting normal booting by pressing 't' on U-Boot loading. If it doesn't, try another software. (screen recommended) 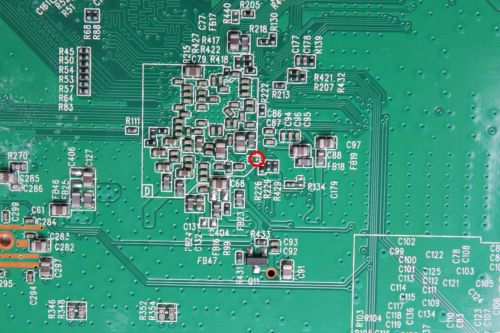 You need to keep a left side of R225 shorted to JTAG GND from boot to finishing of uploading the U-Boot image. A soldered cable will work, but an alligator clip connected to the GND on the JTAG and a small flathead screw driver or scissors pressed against the pad (shown in the image below) work as well, as long as you can hold them steady for about 30 seconds.

How the setup you end up with may look like (I opted for the scissors as the R225 pad is really tiny and I didn't have a proper soldering iron for that): So, short the pin, power on the router and you should see a message similar to this:

Upload the U-Boot Image from another terminal via:

Watch the loading progress via the console and wait a few minutes until it boots the U-Boot file.

Disconnect the R225 pin from GND. Though you can keep it there until the flashing is done.

Allow the router to boot normally by rebooting it. You can now SSH into OpenWrt and start configuring the router. If a release version was flashed, the web configuration should be available now, too.

Install OpenWrt via Web Interface Hack (without opening the case)

TD-W9980 only, the B version supposedly uses a different encryption format the StatPOSTer tool can't deal with. Also note that the instructions in this section are written for 15.05 and W8970 image is used, but 18.06 is already out and W8980 may be a better fit.

This hack comes from member ejs on Kitz Forum. In this post, a description and link to required software is given.
The configuration (which is essential) is hidden (you need to become forum member), so I've added it here for ease of use.

From here, I followed the flash instructions for TD-W8970 by s7mx1 in the forum.

The TD-W9980, is advertised to support at most ITU G.993.2. This excludes VDSL vectoring support. The DSL drivers in trunk actually are the drivers from TP-Link, and do not include vectoring support either. However, I've got this router to run with full vectoring support using a 5.7.6 (77f69e99cd0e0d4d58454880a21438543f1571dc) firmware from http://xdarklight.github.io/lantiq-xdsl-firmware-info/ on my line (NL/XS4ALL):

Download a proprietary firmware blob from http://xdarklight.github.io/lantiq-xdsl-firmware-info/. The firmware version 5.7.6 with the sha1sum 77f69e99cd0e0d4d58454880a21438543f1571dc works well for German DSL lines, for example. If you'll need something different than Annex B for your provider, then just select an appropriate firmware. Make sure to follow the instructions on the download page to extract the firmware blob from the downloaded file. For 77f69e99cd0e0d4d58454880a21438543f1571dc, that means to use a recent 7zip version (15.09 or newer) and run it as follows:

One awesome thing to mention (at least with trunk) is that the reset button resets the configuration, which is very nice. I couldn't find any notion of this, but because of the DSL port, the failsafe mode of OpenWrt (nicely triggered with the WPS button on the back) doesn't make the device accessible. Probably because of something like this https://lists.openwrt.org/pipermail/openwrt-devel/2015-February/031071.html. Anyway, when I made some network changes which were totally wrong, holding the reset button saved the day, restoring the device back into standard OpenWrt configuration, allowing me to access it again.

Obtain the firmware from TP-Link website. You need to care about model version v1. If the name of your TP-Link original firmware contains “boot”, it means that it's likely to contains bootloader, 512 blank bytes, and the rootfs (you should see that the file is 512 bytes too big to be just bootloader + rootfs). Looking at it with an hexadecimal editor, with 512 bytes pages, you will see that if bootloader is taking the 256 first pages (0 to 255), but then the firmware doesn't start at the following page (256) but in page 257.

The rootfs area is from 0x20000 to 0x7c0000 (0x7a0000 sized), erase command is from 0x20000, during 0x7a0000, and write is also from 0x20000, during 0x7a0000. You can double check the image size in after the tftpboot command. Be careful when erasing/writing the flash the radio is required for WLAN and should not be overwritten or erased. A backup is nice to have if something went wrong, it stores also the MAC address for your WLAN (ART Partition).

This is the result of cat /proc/mtd