This is the network topology used as a common reference for most configurations for this section.

Starting from the top of the diagram is the public internet. The network has a single public IPv4 address leased from Verizon ($5US/month) terminating on a Verizon Multimedia over Coax Alliance (MoCA) router. This router handles the telephones, video set top boxes and internet access (triple play). There is a single GigE 802.3 interface to the MAIN router for all internal wired and wireless internet access.

Interestingly, the Verizon MoCA router runs on an ARM926 using the jungo openrq firmware, based on Linux 2.6.16. jungo appears to have been purchased by cisco systems many years ago; cisco is now selling openrq. It looks like Verizon has been limping along without developer support since then…

Now on to more recent technology…

The router switch in MAIN is configured to bridge all LAN-side traffic as the default br-lan interface on the 192.16.3.0/24 network. See lan bridge for a description of this. MAIN handles all the internal stations using the 192.168.3.0/24 network, mostly WLAN stations but several wired ethernet stations for printing and NAS. In the firewall test network:

Unless otherwise noted, an IPv4 address is assigned using DHCP.

MAIN is provisioned with a static lease added for DUT so the DUT will always gets the same IP address: 192.168.3.11. Static routes to the DUT network(s) must also be added to the MAIN routing table so STA1 can communicate with devices in vlan 102 and vlan 103. See ipv4 configuration for provisioning static routes.

The reference topology allows firewall rules to be modified on the DUT in a sandbox without exposing it to the Internet; only MAIN LAN-side stations can access the DUT. Of secondary importantce, firewall rule testing has little probability of causing complete comms loss from STA1 to the DUT (but it can still happen if I really hose the firewall rule set!) 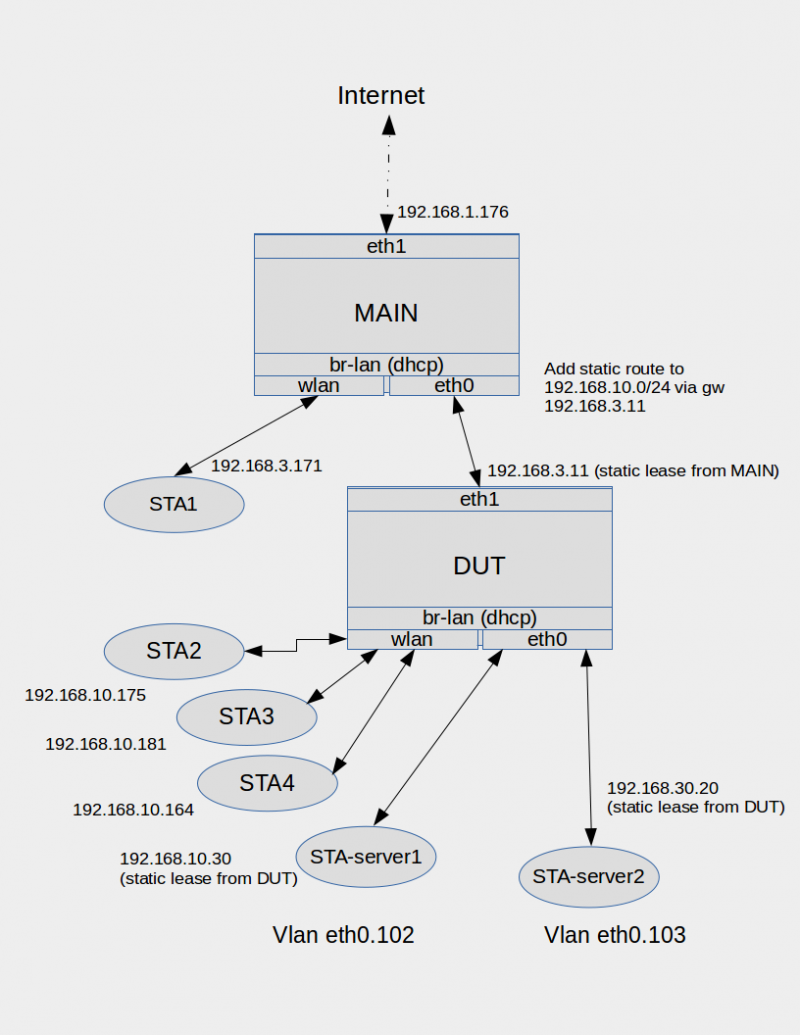