You are here: Welcome to the OpenWrt Project » Table of Hardware » Linksys » Linksys E2000
?

The bootloader on the E2000 contains a tftp server. See bootloader_contains_tftp_server. After powering down the router, plug ethernet cable from your computer to port 1 of your router. The default address of the E2000 is 192.168.1.1, so you need to set up a static route for that ethernet interface on your computer (I usually use 192.168.1.6). You need to use the firmware file named for the router, openwrt-e2000_v1-squashfs.bin. Follow the steps on bootloader_contains_tftp_server to flash the router.

Flashing from the Linksys firmware is unsuccessful using openwrt-e2000_v1-squashfs.bin with most browsers. It gets to about 85-90% and then just reports that it failed, then reboots back into the Linksys firmware. However Internet Explorer doesn't have this issue, it's at least possible to flash OpenWrt onto an E2000 running version 1.0.04 (build 07) of the Linksys firmware using IE 11, and probably other versions.

Flashing with the web interface

It seems that long file names (e.g. openwrt-15.05-brcm47xx-mips74k-linksys-e2000-v1-squashfs.bin) cause the upgrade to fail. Shorten it to openwrt-e2000.bin and it should work (also try doing this on IE if your preferred browser fails).

Unfortunately I have also been unsuccessful trying to use the bootloader's tftp server trying to “put openwrt-e2000_v1-squashfs.bin”. The tftp client just keeps trying until gets an “Invalid Password” error from the Linksys firmware (i.e. the tftp server in the bootloader is missed and it's fully booted and it's the tftp server in firmware that is producing that error). There are hints on the generic.flashing.tftp page about needing to change the name of the file being put but I was unsuccessful finding a name that would work either. It seems that flashing dd-wrt first (upgrade from the default linksys web-interface with image dd-wrt.v24-15962_NEWD-2_K2.6_std_usb_nas-e2000 after a 30/30/30 reset). After flashing dd-wrt I was able to tftp the image to the e2000.

Caveats If you are building your own from buildroot, be aware that:

There are 5 solder pads near the rim on the backside of the PCB, see image from WRT610n: 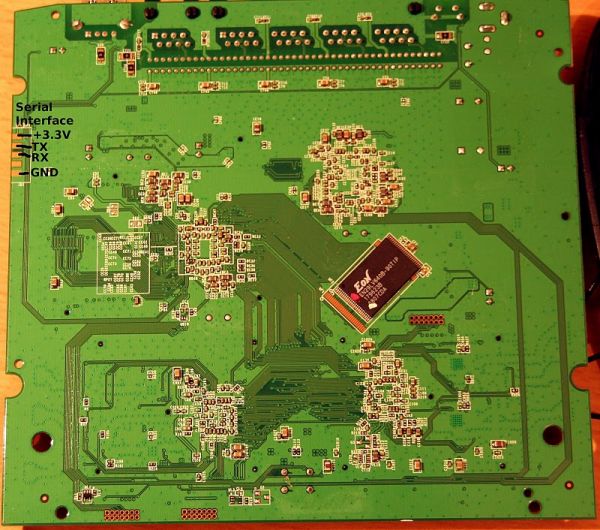 There is also a serial connection on the PCB inside of the WAN port. Serial port settings are 115000@8N1 with no hardware or software flow control. This has been copied from E3000 toh page; location and designation are same for WRT320N/E2000.