You are here: Welcome to the OpenWrt Project » Table of Hardware » devolo » devolo dLAN pro 500 wireless plus
?

Devolo, the device manufacturer, added support for it in OpenWrt. This is great!

The devices comes with a bootloader called u-boot. It's the first software that runs on the device.

At boot, if the internal button is pressed, the bootloader will load and flash a file named “uploadfile” from a tftp server at 192.168.0.100.

So to install OpenWrt, you need to do a bit of preparation first.

Start by connecting an Ethernet cable between the device and your computer.

Then assign the “192.168.0.100” IP address to your the Ethernet card of your computer. There are many ways to do that, here are two examples where it is done with the command line on GNU/Linux, it can also be done graphically:

“eth0” is the name of the Ethernet interface, it might vary across computers and distribution. To list all the interfaces name with the command line under GNU/Linux you can use the following command:

Note that on other operating systems the commands might vary.

When this is done you will need to setup a TFTP server on your computer. We will use dnsmasq for that because it can be run just by typing one command and also because as it is extensively used in OpenWrt devices, and because of that OpenWrt users tend to know it better.

The advantage of dnsmasq is also that it's already present by default in many GNU/Linux distributions. To verify if we already have it simply type:

If we have it, it will print something like that:

If we don't have dnsmasq installed, we need to install it. Again, there are many ways to do it, and it can probably also be done graphically. Here I will again only include command line examples. On debian based GNU/Linux distributions (such as Debian, Ubuntu, Trisquel and so on) you can install it with:

Once we have dnsmasq, we then need to create the directory where the files made accessible trough tftp resides. In the context of server programs like tftp servers, this is often called the tftp root directory. We will create this directory with:

We then need to put the OpenWrt sysupgrade file (Also called image) in this directory, so download that file (“openwrt-15.05.1-ar71xx-generic-dlan-pro-500-wp-squashfs-sysupgrade.bin” at the time of writing), and copy it file in the tftp directory we just created as “uploadfile”. We now need to start the tftp server, we can do that with:

Here $(pwd) will indicate to look for the tftp directory inside the current directory (pwd means “print working directory” and the $() is used to run commands within commands).

Knowing what is going on

It is also a good idea to get some debug logs while doing it. Since dnsmasq is not that verbose, we will use the command line version of wireshark (Sometimes called tshark or wireshark-cli). It can “describe in english” what is going on.

Due to legal constraints, it is a strongly advised to make sure that the device is directly connected to your computer trough an Ethernet cable. This will make sure that you do not capture other people's traffic.

To get an idea of what is going on, first make sure that your Ethernet interface is activated. To do that you can run:

Then to print what is going on run:

As usual, “eth0” the name of your laptop's Ethernet interface.

For instance if the device tries to download the file named “uploadfile” we should have something like that:

Dnsmasq also prints some message when it happens:

However it will not print anything if something goes wrong. In the other hand, tshark will have some information that might help understanding why it is not working.

Tshark can also detect if your Ethernet interface is not up/activated. In that case it will simply refuse to work, complain, and exit:

Then get a power strip with a button and put the power strip on the table where your computer is located and plug the device(The “dlan pro 500 wireless plus”) in it, to easily power-on/power-off the device.

Then to make the device install OpenWrt:

So if you didn't reflash it by yourself, you can easily recover just by re-installing an image trough the TFTP installation procedure.

The default network configuration is:

The powerline ethernet interface name is eth0. Unfortunately it doesn't work without a (non-free) firmware and a configuration file. OpenWrt and LEDE do not ship them as they would need the right to redistribute them.

Once this is done you have to first make sure to get the right firmware and configuration files. On my device you can spot “MT2555” in the top right of the device as seen on this image

So first start by looking, on the top-left of the bottom of your device for either:

In the extracted firmware update, in /usr/intfw you will have the following files:

You can then copy int6x00.nvm to the devolo dlan pro wireless 500 plus.

For the configuration file, it's more complicated as it must be modified to make the powerline chip work properly.

To do that you must first install open-plc-utils on a computer (The source code is at https://github.com/qca/open-plc-utils.git). Once this is done you can then modify the configuration data. You need to configure several parameters:

The MAC address can be retrived by running, on the devolo dlan pro wireless 500 plus:

For now we will just generate a valid configuration data file:

Theses are the commands used to manually load the powerline firmware on the devolo dlan wireless 500 plus:

Using the same Network Membership Key between devices is a way to make device join the same network.

On some (other) powerline devices, the only way to pair devices together is to push a button and wait for the devices to connect together.

open-plc-utils also has documentation and utilities to be compatible with this button push pairing.

To allow devices to talk to other devices on a different Ethernet port, the switch configuration needs to be changed.

To change it temporarily, until the next boot/reboot, you can run the following command:

Or to do the change it in a more permanent way, you can add the following to /etc/config/network:

It will then be applied at next reboot.

It is probably also possible to do the change trough other ways, like trough the web interface (luci).

The Devolo Dlan pro wireless 500 plus has the following buttons:

The pictures below are also licensed under the creative commons cc-by-sa. They show the device in its case from all angles: 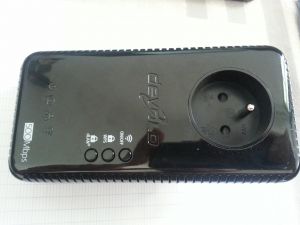 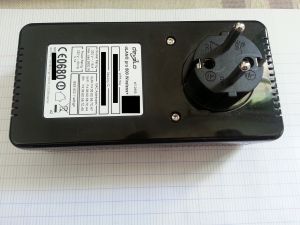 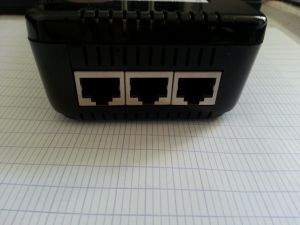 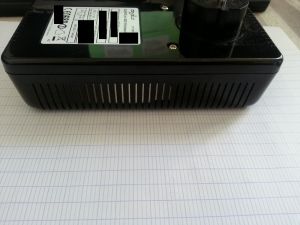 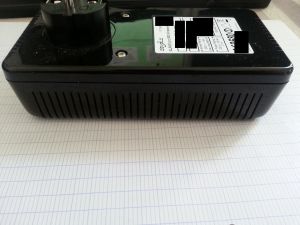 The hardware is made of two PCBs stacked together with pin-header-connectors:

Since the power supply is integrated into the unit, you should not open it.

DO NOT IGNORE THIS WARNING. If you die, you will not be able to contribute to free and open source software anymore.

In doubt, DO NOT OPEN THE DEVICE. If you open it, YOU MIGHT DIE.

Opening the device will most probably also void your warranty.

Because of the above I didn't try to find the serial and JTAG ports on this device. Do not even think of operating the device while open, as it is even more dangerous.

There is an empty SOIC-8 emplacement on the “Access point PCB” that isn't populated, but the pins aren't connected to the WSON-8 flash chip pins.

The details (chip marking names and so on) are inside the pictures EXIF, they can for instance be viewed with okular.

The u-boot has very early init code from atheros (grep for FPGA in the diff).

As required by the GPL, devolo publish u-boot source code. Most of the information above is derived from that source code.

The sources can be found on devolo websites as:

This page is licensed under all the following licenses: