You are here: Welcome to the OpenWrt Project » Inbox » howto » Modular CPE Management

The goal of the OpenCPE Project was to develop, build and deploy a reusable Customer Premises Equipment (CPE) Software stack, which will meet the requirement of distributed development and carrier scale mass CPE deployment scenarios. The choosen OpenWRT Linux distribution does not contain any remote device management capabilities by design. To close this gap, a modular CPE management system was developed. The purpose of this manual is to describe the design, usage and extensibility of this CPE management system, which uses YANG and netconf.

The whole project is on Github. 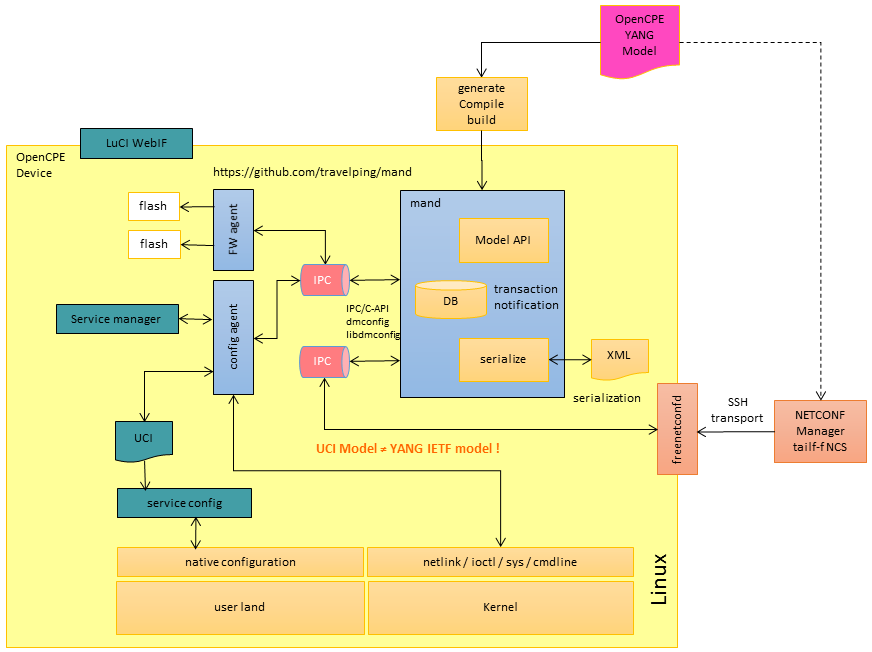 The OpenCPE projects aims to provide NETCONF support in a non-intrusive way. It therefore does not replace OpenWRT UCI framework, but builds on top it. NETCONF support consists of tree main parts:

mand is designed to be the binding and storage element between the connection protocol specific frontends (e.g. freenetconfd for NETCONF) and configation agents (e.g. mand-cfgd) that apply configuration changes on a given target device. It also routes special purpose RPC’s from the frontend to the agent. mand is management protocol and data model agnostic. The protocol frontend is responsible for handling the external connection and for translating requests and answers to and from the mand dmconfig API. The frontend is protocol dependant and mostly data model agnostic. The configuration agents are responsible for acting on changes of configuration values. The agents apply them to the running device and report status information. They also implement special purpose API’s (like for example firmware upgrade API). Configuration agents are data model aware and depend on particular entries in those models.

freenetconfd is NETCONF over ssh frontend for mand. It accepts incoming NETCONF sessions and translates NETCONF requests and RPC to mand’s dmconfig API.

mand-cfg is a configration agent for mand that applies value changes to a OpenWRT system though UCI and report statistic and runtime state values back to mand though mand'd dmconfig RPC API.

It currently implements a limited set of values from IETF YANG NETCONF models for the /system, /system-state, /interfaces and /interfaces-state sub-trees. 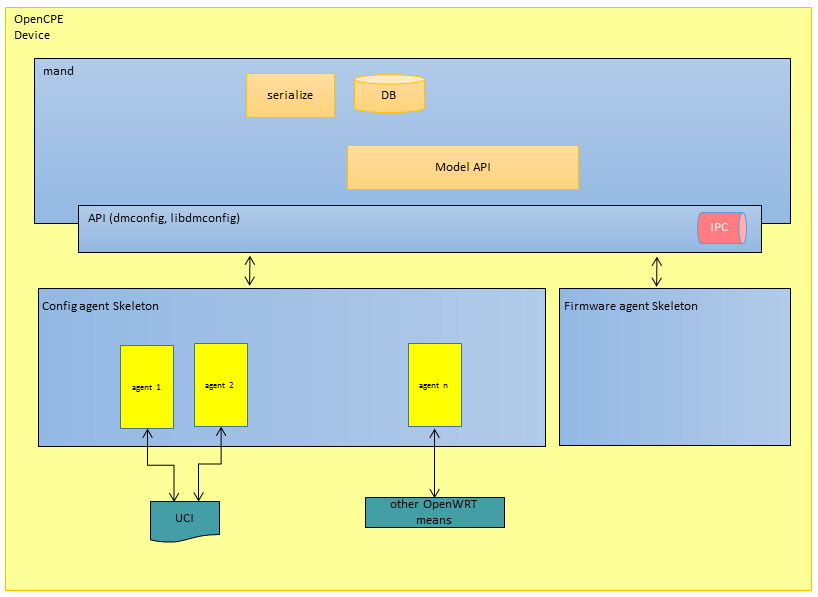 The firmware agent is responsible for updating the device firmware and therefore the implementation of this agent is device specific.