You are here: Welcome to the OpenWrt Project » Documentation » Technical Reference » The Bootloader » CFE
?

Work in Progress!
This page is a continuous work in progress. You can edit this page to contribute information.

CFE on bcm47xx devices allows running/installing firmware using a lot of different methods. Usually only few of them are available, depending on the choice of manufacturer who compiled and installed CFE. Most of the methods require access to the CFE console which means you need to attach a serial console. To get a prompt just keep CTRL+C pressed (or ESC for some models) while powering the device up.

Below is the (hopefully) completed list of methods. The best idea is to find a one looking the best/easiest and check if it works on your device.

Some CFEs start TFTP server for few seconds right after hardware initialization. This is probably the only method of installing firmware with CFE that doesn't require serial console. You simply have to give CFE 1-3 seconds to initialize the switch and then set your IP and start sending the firmware. If you have a serial console, you can identify TFTP server running with the following messages:

Unfortunately even if this method is available for you, it may not work. For example on Linksys E900 it fails after uploading firmware with the:

Please note that CFE may require a device specific firmware image (with a special header), otherwise (when using a generic .trx) it may fail with the:

CFE almost always contains flash command that may behave like both: TFTP client and server. The generic usage is following:

This is very important to pass [destination-device] argument or CFE will write to the flash0 device overwriting the CFE! To see a list of available devices try show devices command.

Regarding [options] there is one important one called -noheader and if you happen to be Linksys owner, there is also -ctheader:

In this scenario we will tell CFE to connect to the remote TFTP server, download firmware and install it on the flash. This means that source-file should be set to host:path/firmware.bin format. Example usage:

Unfortunately on some devices this method makes CFE hang right after downloading the firmware and it gets never written to the flash.

It's also possible to make flash start a TFTP server that will accept firmware for few seconds. The trick is to put : as a source-file. Example usage:

Some manufacturers provide an upgrade command that is usually just an alias to the parametrized flash executed in a loop. Of course it's much less flexible that the flash command, but also has some advantages like:

The most common (and probably safe) usage is to call it with code.bin parameter:

Unfortunately only few manufacturers decide to enable it, but it's probably the most user friendly way of installing firmware. 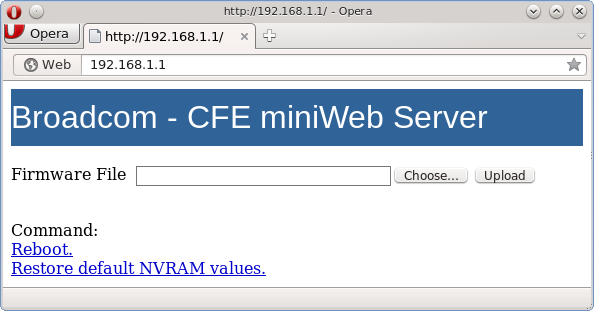 Every bcm47xx CFE has a small NVRAM backup that is used to restore the main NVRAM when it gets deleted or corrupted. If you want to modify that backup NVRAM, see changing defaults page.

bcm63xx CFE is totally different when compared with bcm47xx. The NVRAM is totally different, without any settings stored outside the CFE partition, they are totally embedded into CFE. The CLI has different commands, probably with less options. And almost always there is a web server available for flashing. Less options but more fool-proof.

To access CFE you need to attach a serial console. To get a prompt just press any key while powering the device up.

This is a typical output when starting up the CFE and entering the CLI:

It's probably the most user friendly way of installing firmware. But sometimes some manufacturers decide to disable it (very uncommon). 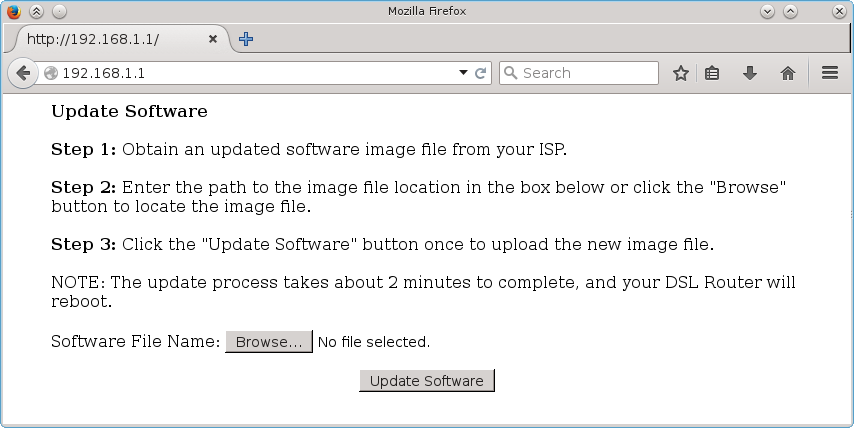 The default IP address of CFE is almost always 192.168.1.1. You should use a static IP in your PC since there isn't DHCP server available when running CFE.

For accessing this web interface:

If you want to install a firmware using TFTP, follow these steps (as an alternative to the above install process).

This is a session of flashing via TFTP:

At the begining of CFE, outside the NVRAM area there exist three interesting parameters:

In this pic you can see the NVRAM highlighted: 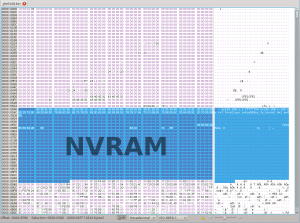 NVRAM versions >=5 always have the checksum placed at the end of the NVRAM.

At the end of the flash outside the CFE, there exists a PSI partition (Profile Storage Information), about 16KB size. In Openwrt this area is protected with a partition called nvram. Do not confuse with the CFE NVRAM!!

There isn't any interaction between CFE and PSI except for restoring it to defaults or erasing this area. The settings present in this area are only used by the OEM firmware.