You are here: Welcome to the OpenWrt Project » Table of Hardware » TP-Link » TP-Link TL-WR842ND
?

This device is a bigger version of TL-WR841ND with more RAM and a bigger flash memory.

Warning: The v9 device is significantly different and unable to support OpenWrt due to memory and flash constraints.

Firmware available now on trunk Everything seems to work): https://downloads.openwrt.org/snapshots/trunk/ar71xx/generic/openwrt-ar71xx-generic-tl-wr842n-v3-squashfs-factory.bin

Back to stock firmware (without bootloader, not tested): http://tplink-forum.pl/applications/core/interface/file/attachment.php?id=2291

No LED besides the one for USB (and maybe for attached ethernet ports) should be lit.

The following steps will serve an openwrt firmware image to the device:

Download an appropriate firmware file from TP-LINK site.
You might need a “stripped” firmware version (without “boot” in the name). See bottom of this page for details and a download link.
Rename the file, so it matches the name required by the router: wr842ndv1_tp_recovery.bin

Configure your PC lan adapter ip address to IP 192.168.1.66 and connect your computer to one of the LAN ports of the router.

Install a tftp server, for windows you can download one from http://tftpd32.jounin.net/

Run the tftp server and browse for the directory that contains the above firmware image. If necesary allow the connection of the server through your PCs firewall, once configured, shutdown the tftp server program, you will launch it again later.

If you connect your pc directly to a lan port on the router, be sure to put the router into failsafe mode FIRST (press reset button and plug power cable release reset button after 3 second), and then launch the tftp server, otherwise it might have problems trying to bind to the PC network interface.

Right after you launch the tftp server, a couple of blank messages will appear into the log window of the tftp server, this is normal, the third or fourth message will indicate that the process of file transfer is in progress.

Now you can install the openwrt factory image of your liking, via the vendor firmware upgrade web page of the router.

You could try to flash directly using this method, an openwrt factory image (for this model obviously) to the router, for me it did not work, maybe you have better luck.

First, enter failsafe mode:
I have a question here, why enter failsafe mode, if you are going Failsafe thats another route, all you have to do is whats next here is a example too http://forum.tp-link.com/showthread.php?81462-How-to-recovery-the-router-when-you-bricked-it

Connect pc to one of the router LAN ports.

Download TP-LINK firmware to tftp root and rename it to wr842nv2_tp_recovery.bin:

You might need a “stripped” firmware version (without “boot” in the name). See below for details and a download link.

Router must be in recovery mode before starting tftpd server, otherwise it might have problems trying to bind to the PC network interface.

After some time you will see all LEDs flashing once followed by a normal restart of the router.

Note the hex value in brackets - “(7c0000 hex)”. If you get different value use your value in lines below, otherwise you may irreversibly brick your device.

Back to stock firmware

Warning!
This section describes actions that might damage your device or firmware. Proceed with care!

With the TL-WR842ND router, there is a catch: the stock firmware is obtained from the OEM: http://www.tplink.com/en/support/download/?model=TL-WR842ND

The following method applies for the V1, V2 and V3(EU) since the bootloader is the same size.

You should transfer the firmeware image to the /tmp folder and revert back to original firmware (if availlable you can flash the firmware via the webinterface as well):

Via the safer method using sysupgrade:

Or you use the mtd method:

It is also possible to revert to the stock firmware using the method with tftp described in “recovery”. (you still need the firmware image without the boot part).

OEM TP-Link firmware for the TL-WR842ND with the boot part removed to revert to the original OEM firmware:

This is only tested on a V2 device.

Note: the default lan interace (VLAN 1) is preconfigured to use eth0 physical interface (cpu untagged in switch configuration). If you want to use more than one VLAN connected to CPU, then CPU port must be tagged. In this case you need to change lan interface from eth0 to eth0.1 (for VLAN id = 1). If using luci, remember to do both changes (switch and lan) before applying any of them.

Please read the article flash.layout for a better understanding. It contains a couple of explanations. Then let's have a quick view at flash layout of this particular device:

ART = Atheros Radio Test - it contains mac addresses and calibration data for the wifi (EEPROM). If it is missing or corrupt, ath9k won't come up anymore.

Here is a LibreOffice Calc ODS for better understanding: .

→ port.gpio The AR9341 v3 platform used in the TL-WR842ND provides 23 GPIOs. Some of them are used by the router for status LEDs, buttons and to communicate with the RTL8366RB. The table below shows the results of some investigation:

Loosen the screws under the two rubber foots at the back of the device before (forcefully) pulling the upper and lower shelfs apart. 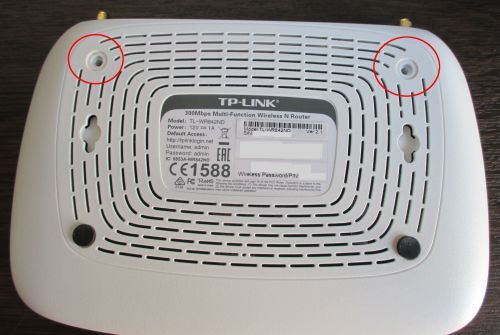 Pin 1 is clearly marked on the board.

To get the serial connection work reliably, you may have to connect a 10k pullup resistor between the TX and the 3.3V pin (same problem as described in TL-MR3420). For some users the V2.1 models did not need this pullup resistor.

The TX pin is connected via a 10k resistor to ground and via a 100nF capacitor to the serial output of the SoC. This gives a 2.5Vpp swing centered on ground. While this may work with some serial adapters, it is on the low side for most. An advantage of this connection scheme is that it protects the serial output to some degree.

For WR-842N v3, to activate serial interface, you need to solder two resistors (or jumpers) according this photo (marked as red circles): 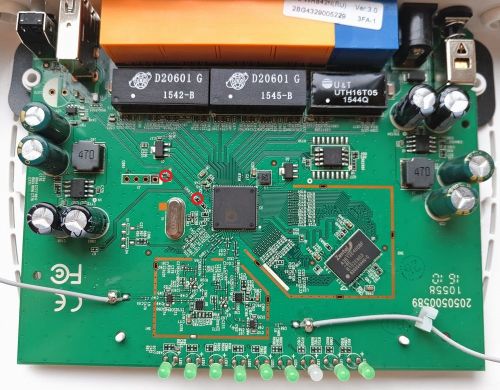 The right settings for accessing the serial console are as follows:

This device has two main power regulators, one 12V→3V3 for the CPU, memory, wireless and one 12V→5V for USB.

This is delivered by a switching regulator with up to 2A at 3V3 output. Power is drawn from external input over one 1A Schottky diode (SS14), with a voltage drop of max .45V at 1A. It should be perfectly safe to draw an additional 100-200mA for your own additions from 3V3.

USB power is derived from the 12V input over two SS14 Schottky diodes, the one also feeding the 3V3 regulator and an additional one. The output regulator is capable of delivering up to 1.5A, but there is a USB current switch/limiter that limits output current to 1A (and goes into 50% duty-cycle on/off in addition after about 200ms on short-circuit).

It should be fine to draw something like 700mA long-term from 5V USB and up to a bit less than 1A briefly. This is enough to spin-up and power most external 2.5“ USB HDDs. You can try it out. The worst that can happen is that it does not work. The USB power-switch is fully protected and the regulator has reserves, as it uses an external PNP power transistor and has its own over-current protection at 1.1A.

I did run it at 750mA current draw from USB for half an hour without the regulator getting too warm. What I measured was 10C below the main SoC. The external 12V/1A PSU should also be fine with these loads. Still, if anything blows up in your face, or your house burns down, I am not responsible…