You are here: Welcome to the OpenWrt Project » Table of Hardware » MikroTik » Mikrotik RouterBoard RB450G
?

With a fast processor, gigabit ethernet, and relatively huge amounts of RAM and flash, this is a very capable device with OpenWrt installed. With the advent of Version 18 OpenWrt, the installation process is now significantly simplified.

VLANs on the RB450G
The RB450G uses the Atheros AR8316 switch chip, which DOES support 802.1Q VLAN Trunking in OpenWrt Version 18, but does NOT support 'hybrid' or 'general' VLAN switching.
The 802.1Q Trunking capability of the AR8316 is quite capable of supporting segregated guest networks since 802.1Q Trunking allows a port to have one untagged VLAN (the 'native' VLAN1) and multiple tagged VLANs on the same port.
See the Mikrotik documentation: https://wiki.mikrotik.com/wiki/Manual:Switch_Chip_Features for an explanation of trunk, access and hybrid port capabilities for the switch chips.
That Mikrotik documentation does NOT clearly explain that Trunk ports can have one untagged and multiple tagged VLANs on one port, however Trunking is implemented and functional on OpenWrt Version 18.

RB450Gx4
If you are looking for OpenWrt support of an RB450Gx4, be aware that it uses a different CPU (IPQ4019) and switch chip (AR8327: supports 'hybrid' VLANs) than the RB450G.
The RB450Gx4 is NOT currently on the list of OpenWrt supported routers, however a WiP branch is available here. More information on the development process and the state of the branch can be found on the forum . Pre-built images are available on the MikroTik RouterBOARD RB450Gx4 device page.

Getting Started: Refer to the Common Mikrotik Procedures for Installing OpenWrt

OpenWrt doesn't provide a firmware image that can be written directly to the flash memory via the firmware update system in Mikrotik's RouterOS. So installing OpenWrt is a two step process that requires two separate kernel images.

You're going to need a desktop computer that has a working serial port (or adapter) and an ethernet interface. This computer will also need to have:

The following instructions illustrate installing Barrier Breaker 14.07, but should be easily adaptable to newer versions. For Attitude Adjustment 12.09 and previous it is required to build OpenWrt from source.

Boot the RB450G from the network

TIP: Try setting hardware flow control to off if you can't get to the bootloader menu (i.e. it always times out without detecting a key press). If using minicom, try minicom -o –color=on –device=/dev/ttyS#, then once minicom opens, type CONTROL A Z and find your way to disable hardware flow control. Or try screen /dev/ttyS# 115200 To figure out which ttyS device you should use, the command dmesg | grep ttyS can be helpful. 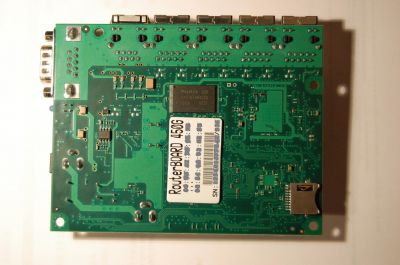 Schematic Component layout with naming is in RB450G Quick Guide

JTag port is present on board, but pins are not soldered and there is no empty to solder in pins holes.

Another product from Microtik RB443 use this JTAG configuration:

The MicroSD slot needs the kmod-mmc, kmod-mmc-over-gpio, and kmod-mmc-spi kernel module packages. The driver configuration is:

The SD card device will be called /dev/mmcblk0, with the first partition called /dev/mmcblk0p1. You will need to format the card from the command line before you can use it. For more information about setting up the card as a permanently-mounted filesystem, the USB storage instructions can be adapted, using /dev/mmcblk0* as the device names.

Some users of the RB450G state that the MicroSD slot is not designed for regular push/pull operations and microSD cards are now fit there well, plus the microSD slot is on the opposite side of the board and is not accessible in many RB450G enclosures designed originally for older RB450 model (no access hole), so when using an old RB450 enclosure you need to fully disassemble the unit to fix / add / remove the microSD card.

List of microSD cards know to work on RB450G with original Microtik RouterOS. Note that since RouterOS uses a different kernel version and MMC driver, cards that don't work with RouterOS may work with OpenWrt, and vice versa.

The AR7161 has two Ethernet controllers, therefore there are two interfaces, eth0 and eth1. one of these is the wan port, the other is the connection to the CPU port of the switch. The AR8316 provides the physical ports for both controllers, but they are separated internally.