You are here: Welcome to the OpenWrt Project » Table of Hardware » Cloudengines » CloudEngines Pogoplug
?

WARNING: the information in this page is old and may or may not still work correctly with the latest OpenWrt images. As of 20 Aug 2019, I've not been able to actually boot a firmware image, It can boot an initramfs image (runs from RAM) fine, and the second-stage uboot also works fine.

Here we describe howto install OpenWrt on the Pogoplug with the help of a serial connection to access the console.

You'll also need a TFTP server on your host computer. Make sure that the following files from the bin/kirkwood folder are accessible through the tftpserver.

The Pogoplug expects the TFTP server to have the IP address 169.254.254.252. You can modify this using setenv or blparam, just set 'serverip' to your TFTP server IP address. Remember to then also set 'ipaddr' to an IP adress within that range.

As mentioned above, you can install the 2-stage bootloader or the single stage one. The process is pretty much the same; the only thing that changes are the locations (addresses) in the Pogoplug NVRAM; we will point out when we are dealing with the single or the 2-stage booloader.

Connect your Pogoplug and reset the device

Now execute the following commands to retrieve and install the bootloader:

To safely upgrade the first stage bootloader it is important to understand what you're actually doing. So we will go through each step with explanations.

First we need to understand how the bootloader partition on the Pogoplug is structured to avoid overwriting stuff we might not want to overwrite. Basically there are three significant start adresses within the NAND which should be noted:

Before you start here are some things to consider:

Currently the u-boot image generated by the OpenWrt build process are smaller than 512KiB. So we can be sure that we don't overwrite any of the existing u-boot environments.<br> Note that this might change anytime (i.e. the bootloader might become larger than 512KiB at some point). So do your checks before proceeding)

These are the commands to install the Bootloader from the u-boot console using TFTP:

Now you can reset your board using either the reset button or using the reset command on the u-boot console.

Installing rootfs (including kernel and devicetree)

In case you're trying this from the second stage u-boot console you might need to set the serverip, ipaddr and ethaddr env variables.

These are the commands to flash the ubifs image to the NAND flash:

How to connect to the Serial Port of this specific device: 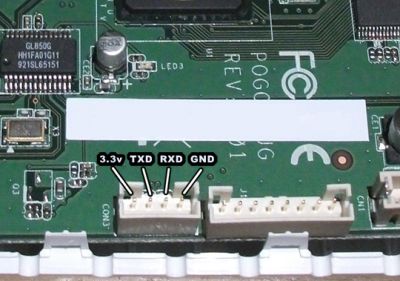 GigabitEthernet, 1NIC, 0WNIC, no switch, USB, 4USB, JTAG, 256RAM, gt32Flash, ARM, ARMv5, ARM926EJ-S, crypto, marvell, kirkwood
This website uses cookies. By using the website, you agree with storing cookies on your computer. Also you acknowledge that you have read and understand our Privacy Policy. If you do not agree leave the website.More information about cookies
toh/cloudengines/pogoplug.txt · Last modified: 2020/10/03 07:03 by tmomas